The Development Department at Women In Distress is always looking for community members who want to give back through the work of the department. We have many opportunities including:

Share your time and expertise with us and help keep domestic violence survivors and their children safe!

Indirect Volunteer Position Description
Our Indirect Service Volunteers are volunteers that have gone through our orientation and background checks and are able to assist the agency in important tasks that do not involve survivors. 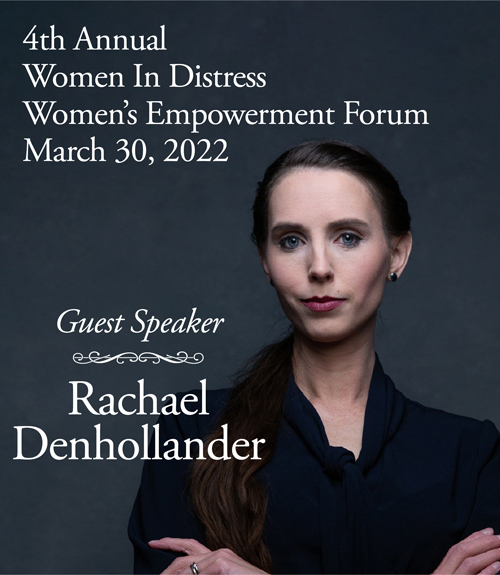 Rachael Denhollander became known internationally in 2016 as the first woman to pursue criminal charges and speak publicly against USA Gymnastics’ team doctor Larry Nassar, one of the most prolific sexual abusers in recorded history. As a result of her activism over 300 women—including numerous Olympic medalists—came forward as survivors of Nassar’s abuse, eventually leading to his life imprisonment.

Her courageous tenacity and ongoing advocacy helped trigger a complete upheaval at both USA Gymnastics and Michigan State University, where former executives and high-ranking officials face numerous criminal charges for their complicity in covering up Nassar’s abuse and lying about what they knew. Instrumental in helping secure a record-setting $500 million settlement with Michigan State University for Nassar survivors in 2018, she continues to act as a fiduciary representing her fellow survivors in USA Gymnastic’s ongoing bankruptcy proceedings.

In 2019 she published an autobiographical account of her experience entitled, What is a Girl Worth?: My Story of Breaking the Silence and Exposing the Truth about Larry Nassar and USA Gymnastics.

Denhollander has extensive experience working with corporate boards, executive leadership, and politicians to help them understand how to lead with courage and integrity through crisis, how to communicate their values within their organizations and to the public, and how to properly respond to reports of abuse. She has advised the boards of some of the nation’s largest universities as they seek to address failures to adequately respond to abuse on their campuses. With extensive experience in the political realm, she has proven an effective advocate in helping push through vital legislative changes at the state level to make it easier for survivors of abuse to obtain justice. For her work as an advocate and educator on sexual assault,

Denhollander was named one of TIME Magazine’s “100 Most Influential People in the World” and one of Glamour Magazine’s “Women of the Year” in 2018. Additionally, she received the “Inspiration of the Year” award from Sports Illustrated, was a joint recipient of ESPN’s “Arthur Ashe Courage Award,” and was named a “Michiganian of the Year” by the Detroit News, along numerous other awards and recommendations. Denhollander has engaged audiences with lectures and live Q&A’s on the campus of numerous universities across the nation, including Harvard, Stanford, NYU, Columbia Law School, UC Berkeley, USC, Pepperdine, and others. She has lectured on leadership both the United States Military Academy at West Point and the United States Naval Academy at Annapolis, and been invited to keynote the National Center on Sexual Exploitation’s annual conference. Denhollander is a highly effective fundraising speaker for child advocacy centers, women’s shelters, and other organizations on the front lines of confronting abuse.

A member of the California Bar Association, Denhollander has educated attorneys on the dynamics of sexual abuse at the American Bar Association’s Sports Law Forum, addressed top corporate attorneys on issues of institutional ethics and fiduciary responsibility at NYU Law School, and instructed attorneys at the annual meeting of the Kentucky Bar Association. Additionally, Denhollander was the commencement speaker at the graduation ceremony of Brandeis School of Law in 2018. She has appeared on CNN, ABC, CBS, NBC, FOX News, BBC, PBS, NPR and regularly appears in national and international print media, including the New York Times, Washington Post, Der Spiegel,Wall Street Journal, and the Associated Press, and is a New York Times and Vox op-ed contributor. Denhollander holds a Juris Doctorate from Oak Brook College of Law and possesses an honorary doctorate from the American University of Paris.

Denhollander lives in Louisville, Kentucky with her husband Jacob and their four young children.

A brief book signing will be held directly following the forum. If you would like to purchase Rachael’s book “What Is A Girl Worth?” on Amazon, click here.

Learn how you can keep yourself safe

Join the mission to spread domestic violence awareness with WID